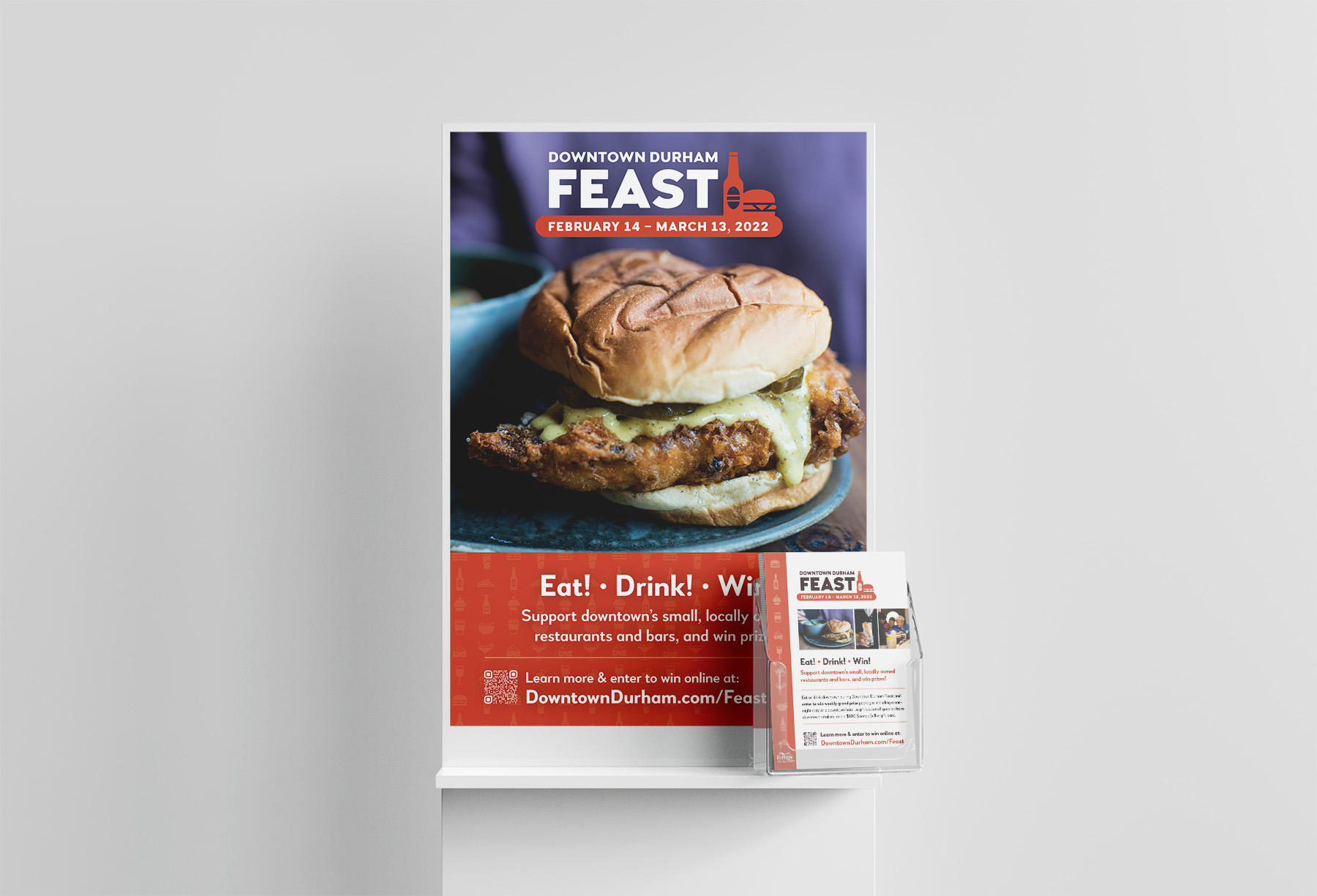 Downtown Durham, Inc. (DDI) has collaborated with the HALO 22 team for years. So, we agreed to the challenge when they approached us with a request for a time-constrained identity, digital, and print project. Their team had just planned a project to help boost sales for downtown restaurants, bars, breweries, coffee shops, etc.—and we only had a week and a half to pull together an eye-catching identity and deploy it in print and on screen.

First, we tackled the naming. “Downtown Durham Food & Beverage Week” was a mouthful. Plus, the first rollout would actually run four weeks and the goal was to go beyond just restaurants. DDI’s landing page describes it best:

Support downtown’s small, locally-owned restaurants and bars, and win prizes! …everyone is invited to eat or drink downtown and enter to win a weekly grand prize of a one-night stay at a downtown hotel, a gift basket with samples of goodies from downtown retailers, and a $100 SpendaBull e-gift card, accepted by many downtown merchants. And as an extra special “Thank you,” we’re offering a bonus grand prize each week to some of downtown’s best customers.

DDI wanted the option to expand or re-launch the event later depending on its success. This meant the identity needed to be flexible enough to support that. The working title, “Downtown Durham Food & Beverage Week,” felt too generic and cumbersome. Some quick research and we landed on “Downtown Durham Feast (with “Feast” being the prioritized word in the hierarchy)—much more marketable and still all-encompassing.

We used Instagram post templates as a crucible for testing some of the options with local business photography. Those were a big hit, and we set up a suite of social media platform-specific templates for DDI to use on all their accounts and in email graphics:

Printing for the Real World

Next up were the print pieces. They needed flyers to print in bulk to leave behind at participating bNext up were the print pieces. DDI needed flyers and promotional posters for participating businesses. Flyers could be more informative—something that patrons could take home with them. Posters would need to be eye-catching but with an emphasis on visuals and the URL for more information.

We’re so happy that we managed to craft a professional, vibrant identity for a local project on a mad dash to the finish line/launch date. The fact that downtown Durham businesses will benefit during tough pandemic times is icing on the cake. Or the extra pickle on the burger, the whipped cream on the coffee…